The last weekend in November is Hogswatch.

(for the uninitiated: Hogswatch is Discworld’s equivalent to Christmas. Discworld is Terry Pratchett’s alternate universe. Wincanton (a real town in England) is twinned with Ankh-Morporkh (a fictional city in a fantasy universe) and every November, a bunch of, in Terry’s words, bloody loonies descend upon Wincanton to celebrate Hogswatch. Clear as mud?!)

Though some of my friends go regularly, I’d not made it last year as it was my parents’ 40th anniversary. This year I was nervous but exc;ited – and hadn’t put a whole lot of planning into my costumes. I knew I was performing twice, and one of those involved chip packets.

So after a 3.30am alarm, staggering out of the house (watched by some very confused cats) at 4.20am and a 3 and a half hour drive, I arrived in Wincanton. Threw myself at my Travelodge room and slept and slept and slept.

At 10am, I found myself at the Memorial hall with Annastasia, surrounded by fellow loonies in outfits and costumes  varying from mild to extreme, and I couldn’t stop grinning.

We taught a burlesque workshop to seven brave ladies and one extremely brave gent. Our chosen music, to match the theme of Going Postal, was… no, not Return to Sender, or any of the usual suspects. We went for Postman Pat.

Then I could wander to my heart’s content (and also packed in meeting Anna’s parents, the Boggises (who have long been heavily involved with Discworld and Hogswatch), long chats with new friends and some shopping, as well as a sneaky nap after lunch.

Come 5pm, I was in the green room, taking fuzzy but excited pictures of myself:

And then we got up on stage and danced. And oh, I had forgotten how much I enjoy performing. 2014 has been so busy and so manic (pfft, so much for my word of the year of “balance”) that I haven’t had much of a chance to dance at all, and it is still an unmatchable feeling to come off stage to appreciative applause (and sniggers, in this case).

Also got to sing the Twelve Days of Hogswatch (harder than you’d imagine, when you’re standing at the front holding up the words but you can’t actually read them yourself… it goes something like “On the FIRST day of Hogswatch, my true love sent to me, a mumble mumble blah blah blah. On the SECOND day of Christ-Hogswatch, my true love sent to me, TWO something mumble…” And that’s entirely sober!

Then the traditional sausage supper at the Bear, and on to the Pink Pussycat Club. Where we danced another number… dedicated to Rincewind the wizard, it involved a red pointy hat with stars on, three kimonos, doing some suggestive things with a potato masher and having a fight over some crisps. And the final reveal was…

(if you don’t get it, don’t worry… it’s a long story. If you want to get it, read Interesting Times.)

Here’s another pic of us during Postman Pat…

As cheesy as I know it sounds, the whole weekend felt like coming home. I didn’t feel like a newcomer (apart from when Nanny Ogg/Renta made me have a Hogswatch Virgin badge…), and as I’ve often found with my more niche hobbies (most notably model horsing – this felt a lot like that), there’s an instant sense of kinship. I even found some more stationery fiends (and friends) during our letter writing salon (an Ink Drops venture) on Sunday.

We were all letting our real selves out to play – our alter egos, but the ones we wish we could take back to everyday life with us. As so often recently, Lotta and I were perfectly in tune. It’s a wonderful feeling.

Having made so many new friends and felt so at home so quickly, coming back to the round world (not the Disc), and the prospect of the day job and doing housework were less than appealing.

I put this off by popping in on the way home to see my ex-headmaster and his family – which I know sounds weird, but my primary school was muchly special. Totally failed to get any photos of us all, but he did keep the sign when the school was demolished to make way for flats…

And it was so lovely to catch up after more than a decade.

So I drove home to my silly kittens through the night, arrived at 10pm, fell into bed to dream of the Disc, and woke up still half there today. I spent this morning waving photos at anyone who would look, and am now settling down to the important work of planning next year’s costumes and skits.

Big thanks to Annastasia for giving me the chance to attend – it’s now an immovable fixture in my calendar.

Happy Hogswatch… I hope you’ve been naughty AND nice!

PS for any non-Pratchett fans, normal service will resume shortly. If you’ve read him and don’t like it, fine. If you’ve never read him then for goodness’ sake go and borrow a book from your library and try one. You’ll never know if you don’t try…!

PPS You don’t actually have to be a fan to come to Hogswatch. I would love, love, love to see some of you there next year! Or at any of the various cons I hope to now attend in 2015 🙂

PPPS If you fancy creating your own alter ego, hop over and have a look at Unfurling Your Wings. It’ll launch a little later than planned due to some mad new VAT laws, but on the plus side, it’s now going to be a much more immersive experience, with goodies coming to you in the REAL ACTUAL POST.

What a year it’s been.

Much like 2014 appears to be doing, 2013 snuck up on me somewhat. Tbe new year is only a couple of hours old, but I wanted to get my review up before my planning posts.

I saw 2013 in at Rob’s with a bunch of new friends, getting rather whimsically tipsy and generally having a wonderful time.

January saw a craft swap with some of my favourite people, lots of snow, a notice to vacate my flat, a ukulele workshop and a visit to London Edge trade show. Who knew that just a year later I’d be helping out Contrariety Rose with her stand there?!

was my birthday month (I celebrated by having dinner with Mum & Gran, and heading to bed with wine and six books. Utter bliss.), and also the month in which I visited Lou’s shop for the first time, had an impromptu school reunion and modelled in a collaborative photoshoot.

March held moving house in the snow, to a little house with a spiral staircase in a riverside village full of mad creative people. I finally got my garden and couldn’t be happier! I spent the very last morning at my old flat creating memories with my best friends, taking burlesque photos for the Paper Dolls. I also had six inches chopped off my hair – eek!

END_OF_DOCUMENT_TOKEN_TO_BE_REPLACED

Quick post today, but wanted to share the photos of our tent at the Fling Festival a couple of weeks ago – it was the most glorious debut for my burlesque troupe. And who knew, when we took that first class eighteen months ago, what it would lead to?

Here we all are with our fab stage kitten Lou: 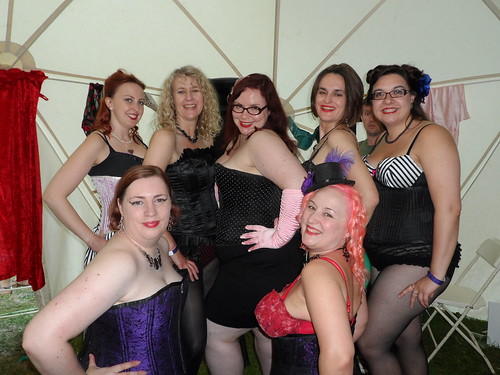 and the rest of the album is on the London Pin Up School’s Flickr.

The Fling always defies description, but to be there as a performer, helping to create the experience for other festivalgoers – it was a privilege, and one of the best days of my life.

Check us out – our troupe is Paper Dolls Burlesque, and we learned (and continue to learn) the art of burlesque with  Jem Ayres at Burlesque Jems.

Quick post today, but wanted to share the photos of our tent at the Fling Festival a couple of weeks ago – it was the most glorious debut for my burlesque troupe. And who knew, when we took that first class eighteen months ago, what it would lead to?

Here we all are with our fab stage kitten Lou:

And here are the rest of the images – squeak!

The Fling always defies description, but to be there as a performer, helping to create the experience for other festivalgoers – it was a privilege, and one of the best days of my life.

Check us out – our troupe is Paper Dolls Burlesque, and we learned (and continue to learn) the art of burlesque with  Jem Ayres at Burlesque Jems.