The non-Olympic part of the weekend

There was a part of my weekend not connected to the Olympics, though London 2012 is assuredly a once in a lifetime kind of event.

Bluebell and I have been getting to know each other better – after our loooong ride with Emily last weekend, I’ve been much more confident this week. So much so that I took her instead of Poppy to my parents’ new house on Sunday, to help them with another stage of moving… there’s still a way to go, but they’re getting there! Was a lovely half hour ride over, and then I stayed for dinner and we put Bluebell in the back of the car and Mum drove me home. Which was also very lovely!

I went to get my eyes tested and contact lenses sorted – which was well overdue. Chose new glasses, had a catch up with the lovely Vickie who remembered me from my last visit in 2010 (this is my first ever 2 year call back – I feel normal! Used to have to go every six to twelve months to keep up with my changing eyes, and it’s wonderful, not to mention much cheaper, to visit the optician the same amount as a normal person!)

Saw the coolest corgi ever in the window of River Island…

I have also been web designing and finishing the last bits for the Polka Dot Swap (yes, I know, last minute dot com!) and will be posting the swap parcel Tuesday when I’m back in the office. Working tomorrow, but from here to avoid some Olympic madness in Stratford. Pics once it’s been received – don’t want to spoil the surprise! The new website (actually there are two) are also surprises, although watch this space!

And that was followed by a lovely cuppa, natter and chocolate cake at Mimi’s house, with Christina who I haven’t seen since I left the library. Lovely. Had my first cup of Ceylon tea and I love it – much more than normal tea! 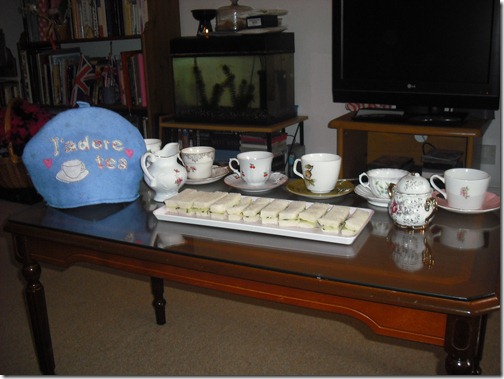 Finished my weekend curled up with my laptop, a book, tea and chocolate biscuits, just as Sunday evenings should be.