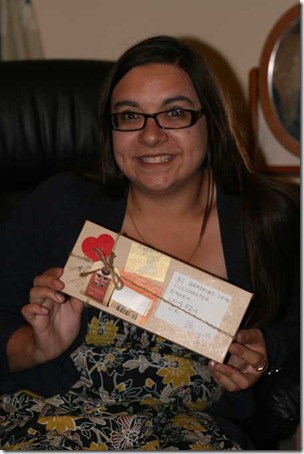 Being, as I’m sure you guys have grasped by now, a fairly crafty type, I had intended for AGES to join one of the many glorious swaps going on. They happen over on Crafteroo forum sometimes, but I’m a rubbish member and don’t pop in nearly as often as I’d like to. (They have however just launched the awesome Crafteroo magazine… proper post on that coming soon, but go buy it for the bargainous price of £1.50 – it’s fab!)

So when I tripped over the Curiosity Project, quite by chance, I signed up. The timescale was two months from receipt of your swap address, and it was totally anonymous until after boxes had been both sent and received. Clearly, anyone signing up would probably be relatively similar to me, and the brief? To fill a box with curiosities and post it to your anonymous recipient.

I was muchly excited when, just a couple of weeks after we’d got our addresses, a box addressed to me, but without my name, arrived. You can see me holding it in the ridiculously cheesy pic above. Here’s what was in it… 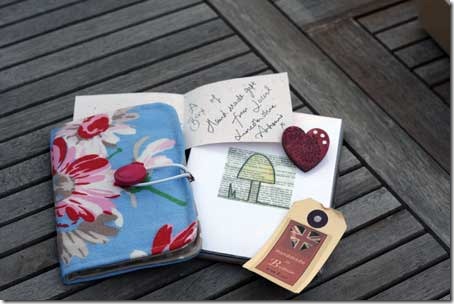 A beautiful handmade floral notebook, handmade notecards and the most beautiful brooch. I was so excited I squeaked… my old housemates from uni were up and I think they were a bit mystified (but also used to my bizarre ways!). I LOVED everything, and it really was as if my sender knew me! Here it is on the Curiosity Project’s blog.

I’d been busy collecting things to put in my own box to send, but really wanted to include something handmade and hadn’t made anything in aaaaages. Spurred on by the handmade gorgeousness, I made some button hairslides and this was the eventual package that left my house…

It was blogged on the Curiosity Project’s blog a couple of days later, and looks like my lovely recipient Nicola (who was also my sender, eee!) loved it as much as I loved mine! Even the appallingly hand-typed note, hehe! We’re now following each other on Twitter, and I shall absolutely definitely be taking part again, it was amazing 😀

Mostly, when I head for my postbox, I have several letters for the previous occupants (I’ve been there over a year, it’s mental), a bill or two and some junk leaflets. But sometimes I get really exciting mail… I have a small selection of friends who still write the old-fashioned way, including Chloe at Slightly Triangle, Viki at Vicktrr Photography and shortly Amii from Scarlet Pout.

Anyway, the other day I went to check my post and found this waiting for me… 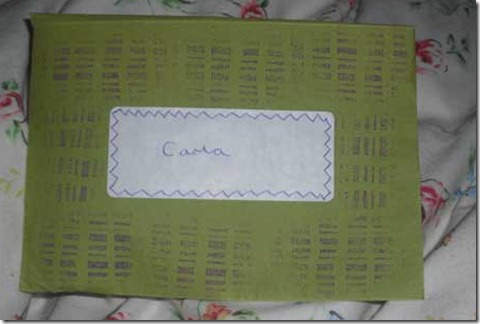 On opening it, there was a lovely note from Chloe and some PRESENTS!! Tiny little beautifully-wrapped parcels… unexpected and very lovely 🙂 More so as I was feeling a bit down for no particular reason, and there’s nothing lovelier to cheer you up than knowing someone’s thinking of you. 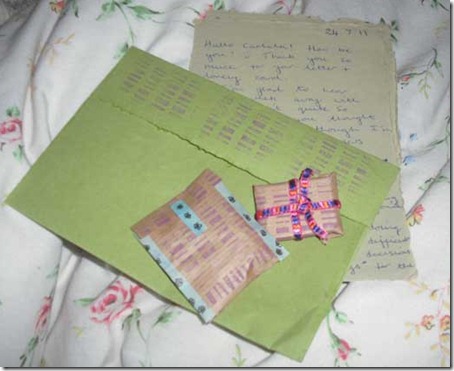 Inside the parcel was this utterly gorgeous hand painted pendant by the very talented Chloe, signed on the back and everything 🙂

And some beautiful beads which I shall incorporate into some kind of jewellery very soon, for me to wear instead of to go in the shop.

Thank you so much Chloewoo, you made my day!

(Amii, if you’re reading, your letter is coming soon, and Viki, likewise, along with your Christmas and birthday pressies….)